Gallium arsenide is a III-V group semiconductor. It is a dark gray crystal with metallic shine. This material is widely used in infrared optics, opto- and microelectronics.

Doped crystals of gallium arsenide are used in many applications. The introduced atoms may form substitution solutions by replacing gallium or arsenic atoms, or be introduced in pairs substituting adjacent atoms ion the lattice, or reside in interstitial positions. The properties of a doped crystal strongly depend on interaction of the doping agent with the intrinsic defects of the crystal. The crystals used in laser diodes, LEDs, photocathodes and RF generators undergo high silicon doping. In microelectronic applications GaAs is mostly non-doped semi-insulating. [1]

It is worth noting that only non-doped semi-insulating GaAs is used in optics. In low-power CO2 lasers operating at 9.6-10.6 μm wavelength, gallium arsenide can be an alternative for zinc selenide and can be used for lenses and beam splitters. Due to their nonlinear optic properties, gallium arsenide crystals can be used in therahertz photonics as THz radiation generators.

Non-doped semi-insulating GaAs is highly transmissive in mid-IR region at wavelengths between 1 and 15 μm, as well as in THz region (λ = 100-3000 μm). 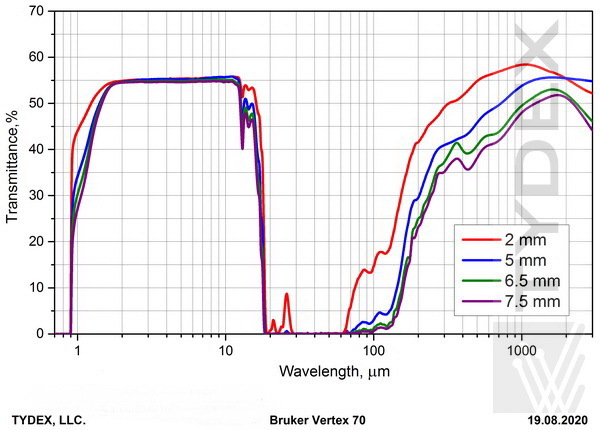 In some cases, ex. laser rangefinders, gallium arsenide windows are used at wavelengths of 1.064 and 1.55 μm. These cases require maximum possible transmittance between 1 and 2 μm.  If window thickness is fixed, the transmittance depends only on crystal growth method. Our company uses gallium arsenide crystals with maximum transmissivity in this region. Absorption coefficients and detailed transmission spectra for this region are available on demand.

The low slope of the spectrum in fig. 1 between 0.9 and 2.5 μm differs to the materials as germanium and silicon (see fig. 2). It is determined by excitation of deep-level impurities which are always introduced into GaAs crystal during its growth and attaining semi-insulating state.

where r is the linear electro-optic tensor, n0 is the refractive index in the absence of electric field, EEX is the strength of external electric field.

As gallium arsenide is a cubic crystal, following components of the tensor rij are non-zero: r41 = r52 = r63 = r. Coefficients of the linear electro-optic effect for GaAs are given in table below. Superscript T or S denotes respectively low (zero to sonic) and high frequency coefficients. [2]

Based on our own measurements using terahertz time-domain spectroscopy, we calculated the dispersion of the refractive index for terahertz frequency range:

Comparison to germanium and silicon

Fig. 2 gives the transmission spectra of the optical-grade (non-doped, semi-insulating) gallium arsenide, optical (high-resistivity, sub-intrinsic) germanium and high-resistivity (over 10 kOhm·cm) silicon. Spectra are shown from the beginning of transparence region (1-2 μm) up to 2500 μm for illustrative purposes and to help selecting the material best suited for your application. 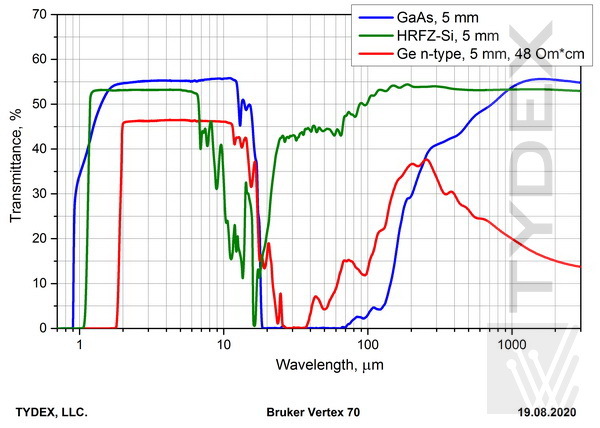 We use gallium arsenide for windows, lenses and prisms in transmission optics for IR and THz frequency ranges. We also manufacture nonlinear optical components of this material.

Please note only ready and polished parts  (not raw gallium arsenide) are supplied. 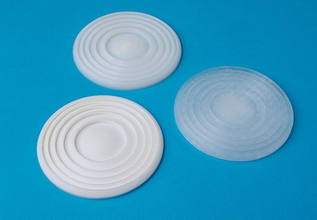